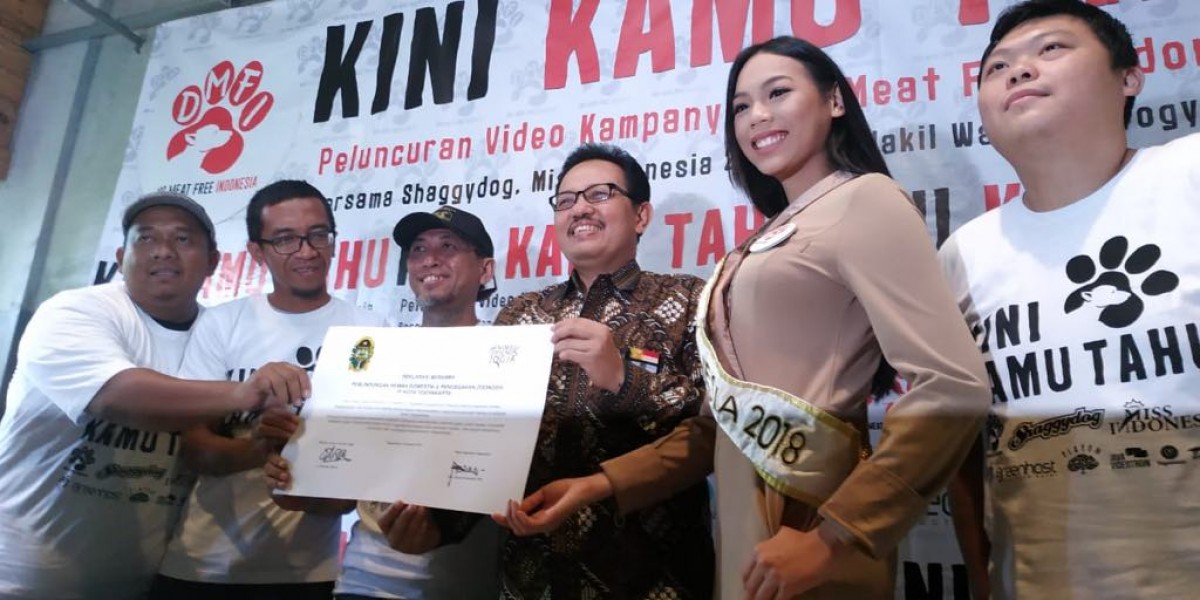 Added on Thursday, 31 January 2019
As part of our ongoing campaign, the Dog Meat Free Indonesia coalition held an event in Yogyakarta (“Jogja”) with our wonderful new ambassador for our nationwide campaign, Alya Nurshabrina – “Miss Indonesia 2018” – and the wonderful Indonesian music band “Shaggydog”who have been great ambassadors for our campaign since our launch in November 2018.

Alya painted a beautiful DMFI mural for the campaign in Jogja, a city key to our campaign given that 6,500 dogs are slaughtered and consumed here alone each month, despite global and national condemnation and the government’s pledge for action to tackle these horrors that are cruel, dangerous and tarnish the country’s international reputation, following the release of DMFI’s nationwide investigations throughout 2018.

Following the unveiling of the mural, a press conference was held with Shaggydog and Alya where a copy of the over 1 million signatures gathered last year was handed in to Jogja’s vice mayor, and he latest “I didn’t know” video was premiered to shocked government participants and the media, featuring Shaggydog.

This powerful campaign video was released following the success of DMFI’s campaign video used at the DMFI launch back in November 2018, featuring international celebrities – including Ricky Gervais – and Indonesian superstars, Sophia Latjuba, Chelsea Islan and Gamaliel!

The vice Major of Jogja received the petition and we are committed to working together to ensure promises are followed up with meaningful and impactful change for the millions of dogs and cats who suffer unimaginably each year to supply the demand for dog and cat meat.