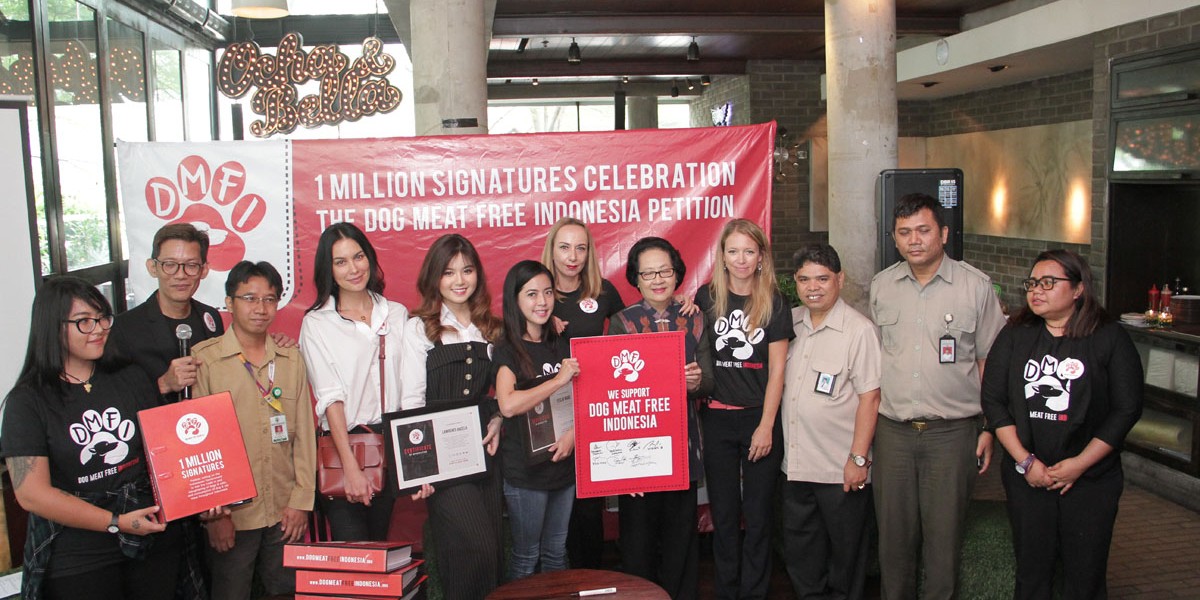 Added on Monday, 05 November 2018
Indonesian super stars and the Dog Meat-Free Indonesia coalition gathered today in Jakarta to officially submit a petition to the Ministry of Agriculture and Ministry of Health calling for an end to the country’s brutal dog and cat meat trades. Over one million signatures were collected from around the world, to represent the more than 1 million dogs and hundreds of thousands of cats who are brutally killed each year in Indonesia for human consumption.

The DMFI is a coalition of national and international animal protection organisations comprising Change For Animals Foundation, Humane Society International, Animals Asia, Four Paws, Animal Friends Jogja and Jakarta Animal Aid Network who have spent years documenting the brutality of the trade and campaigned tirelessly for an end to these horrors on grounds of both animal cruelty and risks to public health and safety. 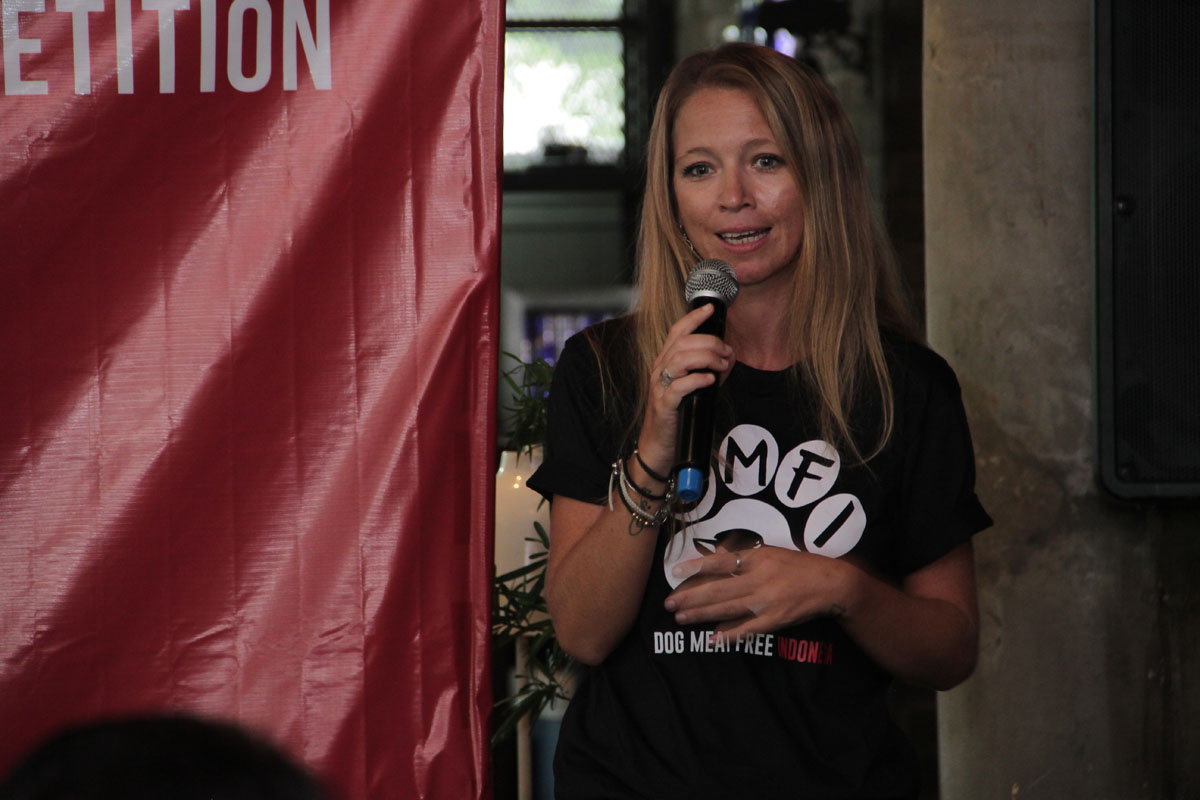 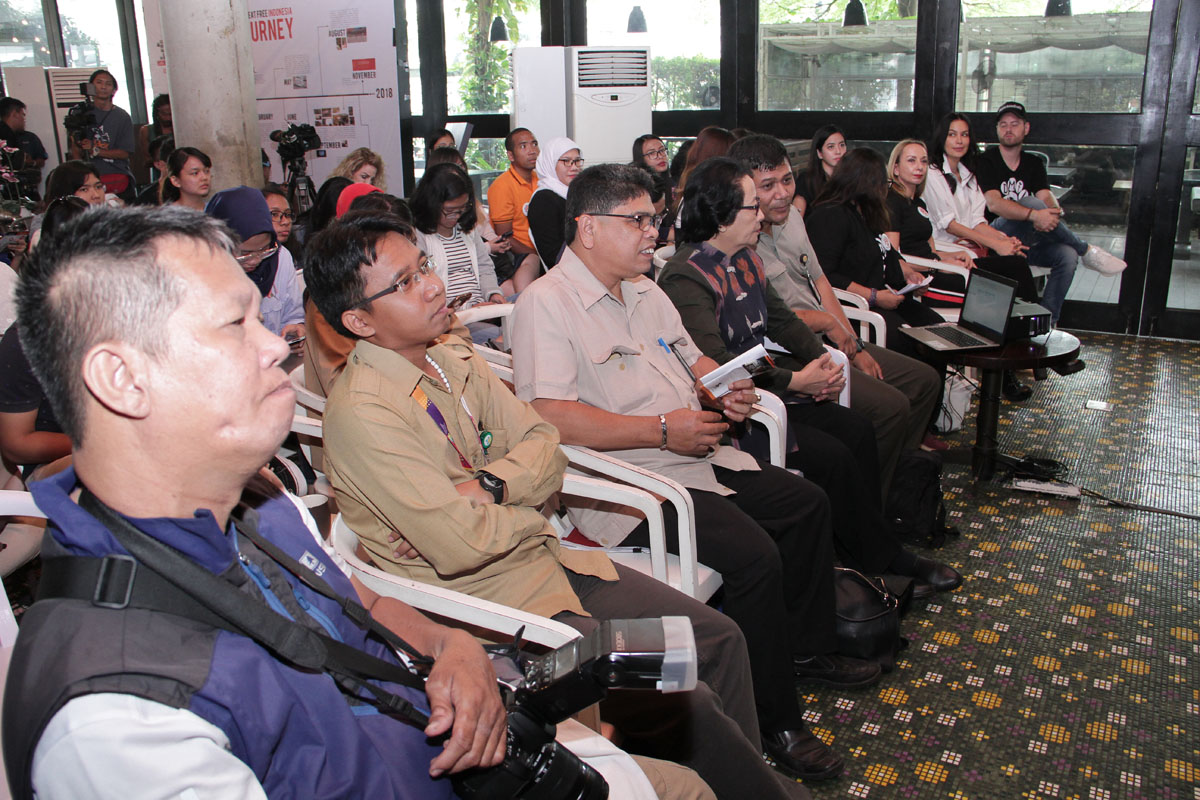 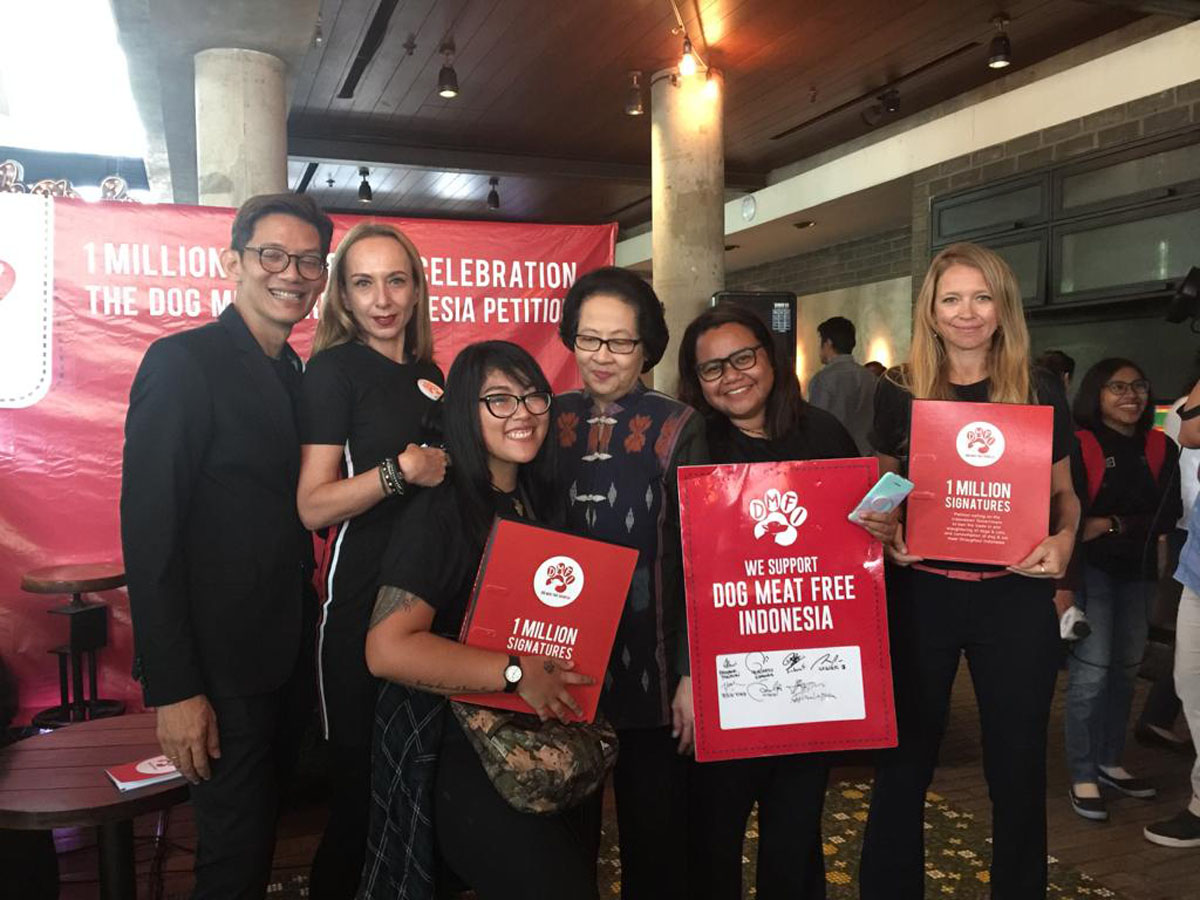 The petition hand in follows a series of DMFI investigations exposing the heart-breaking horror of the trade. DMFI has filmed dogs being stolen from the streets and people’s homes, bound and gagged by traders, thrown into the back of trucks, bludgeoned over the head in markets and slaughterhouses, and countless dogs and cats being blow-torched whilst still alive. Although dog and cat meat are only eaten by a small minority of people in Indonesia, they are trades that affect whole communities who are often terrorised by dangerous dog and cat thieves. Furthermore, published data spanning decades as well as research conducted by the coalition has documented the alarming fact that the dog meat trade increases the risk of spreading the deadly rabies virus, and rabies-infected dogs are being sold in markets for human consumption, despite grave warnings from human and animal health experts.

In August this year, national and regional government officials agreed to issue a ban on the trade in dog and cat meat in Indonesia, and this was followed in October with a circular letter from the Central government calling on provincial governments to take action. DMFI campaigners have welcomed these moves, but say the need to turn pledges into action on the ground is urgent as tens of thousands of dogs and cats every week continue to be stolen and brutalised for the trade.

Lola Webber, CFAF co-founder and Head of the DMFI coalition, said “Every one of our over one million petition signatures represents one of the millions of dogs and cats whose lives have been lost each year to Indonesia’s brutal and dangerous meat trades. The suffering of the animals caught up in the trades can no longer go ignored and in their honour, and for those for whom change has not come too late, we stand united in our commitment to support the realisation of a dog and cat meat free Indonesia, for the sake of animals and people alike.”

“With hundreds of markets and slaughterhouses selling dogs and cats for meat throughout Indonesia, in the scale of the problem is potentially catastrophic for Indonesia’s attempts to eliminate rabies, and gravely jeopardises the health and safety of its citizens and animals. Indonesia is a country of world-renowned natural beauty, but its international reputation is marred by the ugly brutality of its dog and cat meat trade. The government has pledged action, and we, the dog Meat Free Indonesia Coalition are ready to assist in implementing and effective and impactful action plan,” added Karin Franken, DMFI representative.

At the event, representatives from the Ministries of Health and Agriculture, affirmed their commitment to working with the Dog Meat Free Indonesia coalition to achieve the shared dual aims of ending the dog and cat meat trades and safeguarding public health and safety.

Mr. Galopong Sianturi from the Ministry of Health agreed that the whilst dog meat is consumed by less than 7% of the population, it threatens the health and safety of the entire nation, through the transmission of rabies; and furthermore, that it is an unhealthy source of meat despite claims of it’s medicinal properties by proponents of the trade.

He went on to state, that “the Ministry of Health will strongly support a program to end the dog and cat met trades if the Ministry of Agriculture initiates the required animal protection regulations.”

Dr. Sugiarto, M.Si, Department of Vector and Carrying Disease Animals Ministry of Health warned that “the transportation of dogs for human consumption is very risky and contributes to the spread of rabies, which could lead to an outbreak.”

Dr. Wiwiek Bagja senior advisor of the Indonesian Veterinary Medical Association (IVMA) stated: “It’s very clear that the dog meat trade is violating the welfare of animals, welfare of public health and violating regulations within the government. In the definition of the Food Law, dog meat is not in the category of food animals.”

The DMFI campaign has garnered the support of more than 90 Indonesian and global celebrities including Cameron Diaz, Chelsea Islan, Elizabeth Hurley, Sophia Latjuba, Simon Cowell, Ellen DeGeneres and Pierce Brosnan who earlier this year sighned a letter to President Joko Widodo calling for action to be taken to end to the trade. 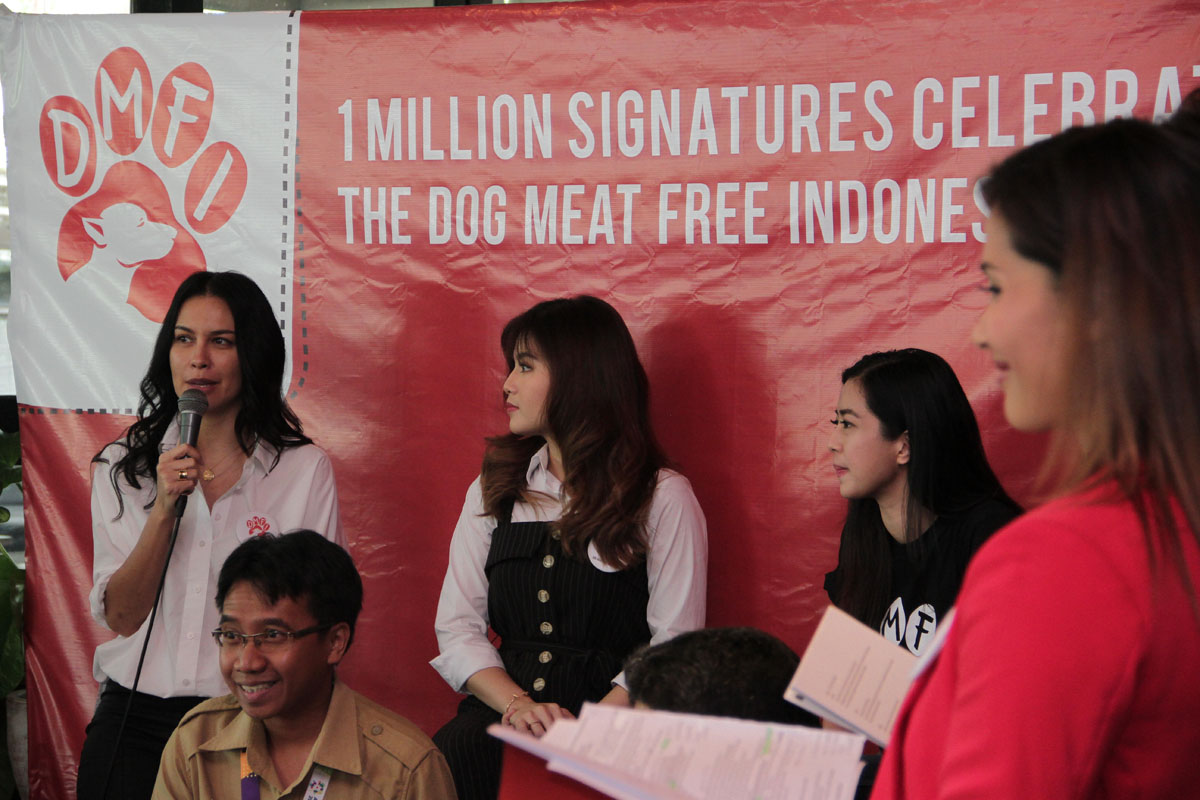 Sophia Latjuba, who attended the petition hand in, hopes to see the government implement a full ban quickly. She said: “This is not a debate about culture or ‘custom’, this is an issue of animal cruelty and human health. The trade we are seeing in Indonesia is profit-driven and is not motivated by any desire to maintain a culture. The cruelty is unforgiveable and I stand alongside the Dog Meat Free Indonesia coalition in calls for urgent action to be taken.”

Similar petition hand-ins are taking place this week at Indonesian embassies in London, UK; Sydney, Australia; and Washington DC, in the United States.