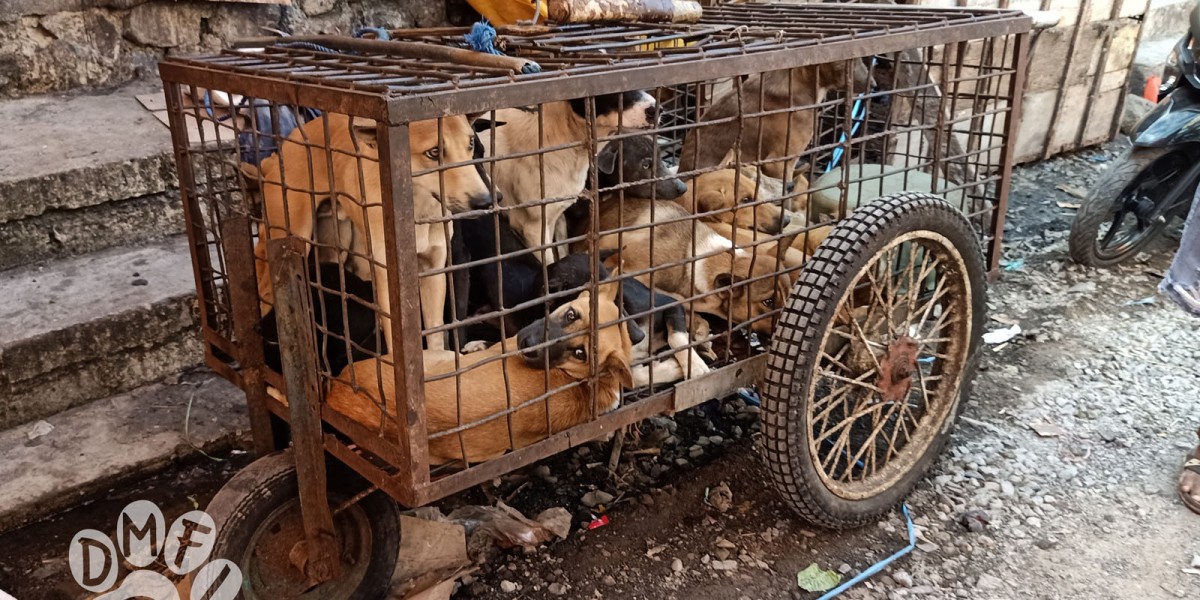 Added on Thursday, 22 August 2019
DMFI’s petition signed by over a quarter of a million people from around the world calling for an end to the brutal dog and cat meat trade has been presented to Olly Dondokambey, Governor of North Sulawesi. The hand in comes as new shocking video evidence from the Dog Meat Free Indonesia coalition reveals the killing continues unabated in Tomohon, despite the Mayor’s office having given an assurance it would end.

JAKARTA (22nd August 2019) – A petition signed by over a quarter of a million people from around the world calling for an end to the brutal dog and cat meat trade has been presented to Olly Dondokambey, Governor of North Sulawesi, by campaigners from the Dog Meat Free Indonesia coalition and local animal protection groups. The hand in comes as new shocking video evidence from the Dog Meat Free Indonesia coalition reveals the killing continues unabated in Tomohon, despite the Mayor’s office having given an assurance it would end to British actor Peter Egan during his visit with coalition representatives to the area earlier this year. Footage collected by the coalition last week shows dogs being beaten with a club and clearly still alive whilst being blowtorched, all in front of terrified caged dogs awaiting their turn. 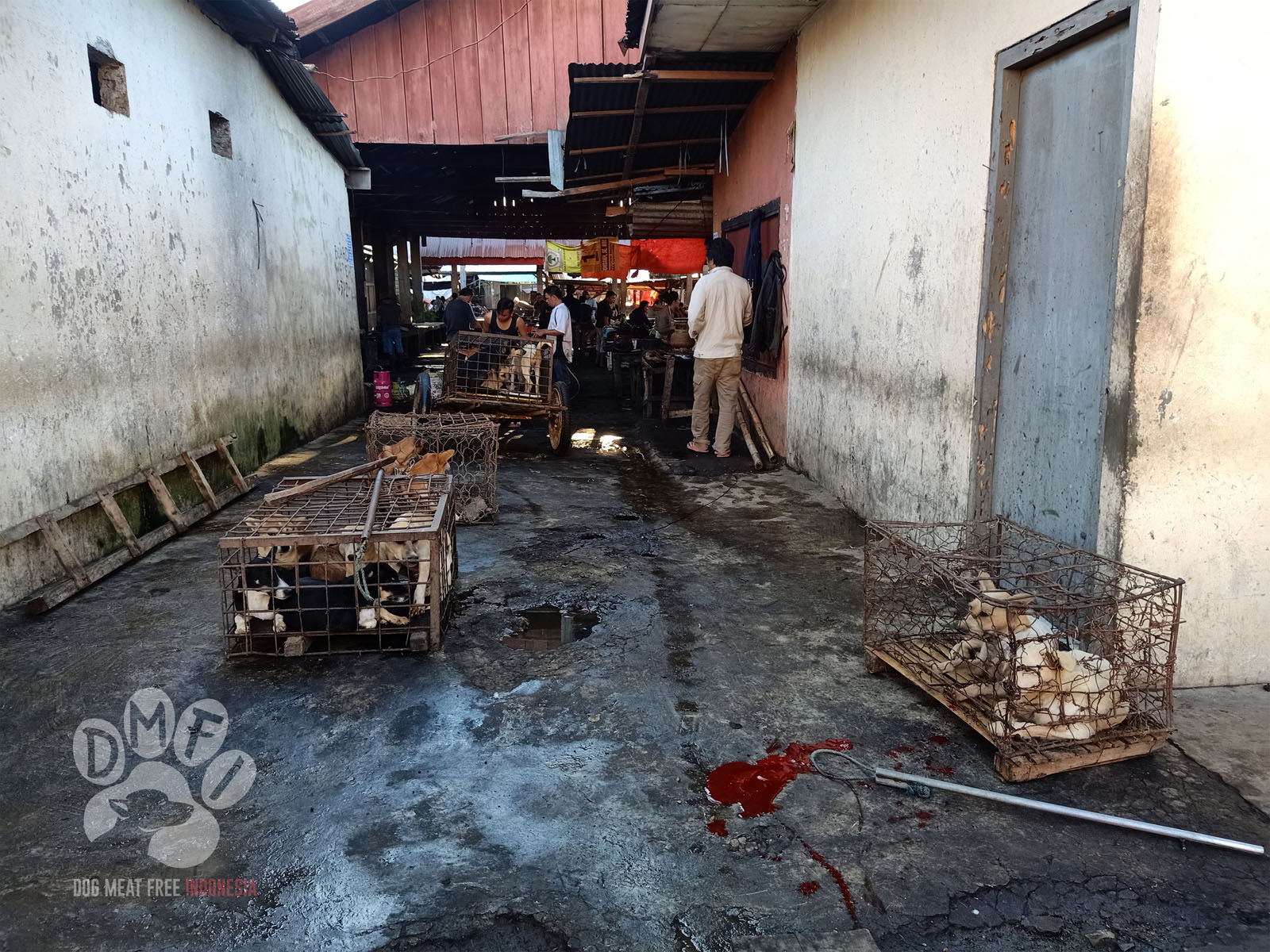 The 250,000 signature petition calls on the authorities to end the trade in and slaughtering of dogs and cats and other animals at “traditional markets” throughout North Sulawesi, where tens of thousands of dogs and cats are slaughtered each month, with documented extreme cruelty a regular occurrence. DMFI investigators have filmed dogs being repeatedly clubbed over the head and blow-torched alive, the majority of whom are stolen pets. Research has shown that between 8-11% of dogs sold for human consumption are infected with rabies in markets located throughout the province.

The Indonesian Government issued a Directive in September last year to ban the dog and cat meat trade, but Governor Olly Dondokambey continues to defy this, with the brutal trade rife throughout North Sulawesi despite warnings about the health and safety risk to local communities and international tourists. North Sulawesi continues to have some of the highest numbers of human deaths attributed to rabies in Indonesia.

Earlier this year, in response to the DMFI’s campaign, representatives from the Mayor of Tomohon in North Sulawesi announced that the sale of live dogs and cats for slaughter had been prohibited at its notorious “extreme” markets where thousands of dogs and cats each month are subjected to extreme cruelty in public streets, being clubbed and blowtorched. They also pledged that within a year the sale of dog and cat meat would also be banned. The same assurances were also expressed in person by Harold Lolowang, a representative from Tomohon City Mayor’s office, to Egan during his visit to Tomohon “Extreme” market earlier this year. However, fresh investigations last week have exposed these to be empty promises as once again DMFI filmed dog and cat traders operating openly and unobstructed by the authorities. With no sign of the Government’s Directive being implemented, the trade in dog and cat meat, and the theft of pets in the area to supply the markets, is expected to continue unabated, particularly during the Thanksgiving period in Minahasa when dog and cat meat is most popular amongst locals celebrating the Pengucapan. 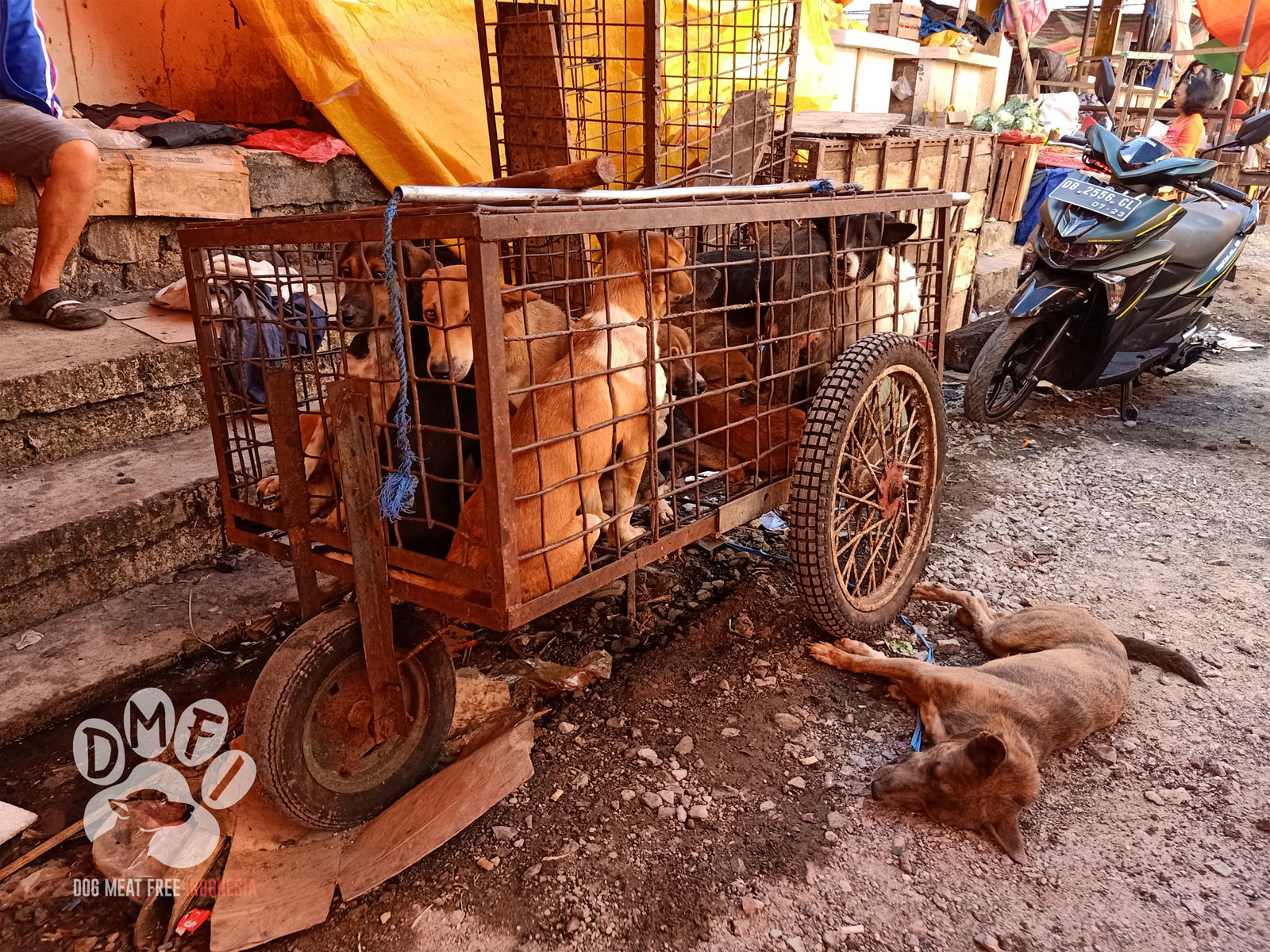 Peter Egan said: “I am shocked and saddened to see DMFI’s latest evidence of horrific dog and cat abuse at Tomohon, the very same abuse that Mr Lolowang of the city mayor’s office assured me personally would no longer be taking place. It’s devastating to know that it’s business as usual for the dog and cat meat traders in Tomohon. The authorities have the power to stop it immediately, but instead they appear to be ignoring the Directive issued by the Central Government, and the risks the ongoing trade poses to public health and safety, not to mention animal welfare!”

Lola Webber, Change For Animals Foundation co-founder, said: “Given the extremely grave nature of the animal cruelty we have filmed over a long period, including clear evidence of dogs and cats being routinely bludgeoned and blowtorched alive at markets, we are appalled that the North Sulawesi Governor refuses to acknowledge the shocking animal suffering. To make matters worse, the risk of rabies transmission posed by the dog meat trade is very well established, and at these markets we see dogs of unknown disease-status being transported in from other provinces in clear breach of the law.”

Karin Franken, co-founder of Jakarta Animal Aid Network., said: “The Indonesian government has already vowed to end these illegal and dangerous trades, but now it is up to the regional authorities to take action and to prioritise the well-being of the nation and its population rather than the minority who partake in illegal activities.”

Tourists who visit live animal markets in Indonesia are also potentially at risk from zoonotic diseases. An estimated 12 million tourists visit Indonesia each year and macabre “traditional markets” where dogs and cats are slaughtered and butchered in the streets in unsanitary conditions are often promoted by local tour guides in North Sulawesi. Over 1 million tourists from Australia, an estimated 360,000 from the United Kingdom, 330,000 from the United States, and between 200,000 and 260,000 each from the Netherlands, Germany and France visit the archipelago each year and could unwittingly expose themselves to rabies and other diseases if visiting these markets. Governor Olly Dondokambey recently met with President Jokowi to discuss ways to increase tourism to the province, with Dondokambey anticipating the number of tourists could reach one million per year.

Kelly O’Meara of Humane Society International said: “Indonesia is a country of world-renowned natural beauty, but its international reputation is marred by the ugly brutality of its dog and cat meat trade. With the volume of dogs being smuggled for a trade closely associated with the spread of rabies, coupled with the unsanitary slaughter at markets, innocent travelers could be exposing themselves to dangerous and even deadly diseases. American, British, Australian and other tourists would be well advised to stay away. The lack of government action to crack down on this trade is certainly calling into question Indonesia’s position as a prime tourist destination.”

Dog meat is consumed by less than 7% of Indonesians nationally, but the trade presents a health risk to the entire population. Indonesia has the world’s 5th largest number of human rabies deaths in Asia each year, and it is no coincidence that the provinces and regencies with the greatest demand for dog meat are also those with the highest prevalence of rabies.

Dr. Katherine Polak, FOUR PAWS director, said: “Our investigations have shown North Sulawesi to be dragging its heels on the very real human and animal health and safety risks of the dog and cat meat trades. Inherent to the trades are extreme cruelty to animals and illegal activities, including pet theft, plus the very real threat of rabies transmission to tourists and communities. This results in immeasurable damage to the country’s international reputation.”

Angelina Pane of Animal Friends Jogja said: “The lack of action in North Sulawesi is in stark contrast with other regions in Indonesia that have begun to enforce the government directive to stop the dog meat trade. In June, following the submission of DMFI investigative findings, the Regency of Karanganyar announced it would completely eradicate dog meat cruelty.”

Meanwhile in Bali where authorities are mindful of the threat dog meat and rabies poses to the vital tourism industry – particularly from Australian travelers –77 stalls selling dog meat have been closed down.

Animals Asia Founder and CEO, Jill Robinson MBE, said: “Indonesia’s people, and the thousands of dogs suffering the most unimaginable cruelty, deserve much more than empty words. Those in power have to act now if we are to prevent innocent people dying of rabies and the unacceptable suffering of dogs and cats on a mass scale.”