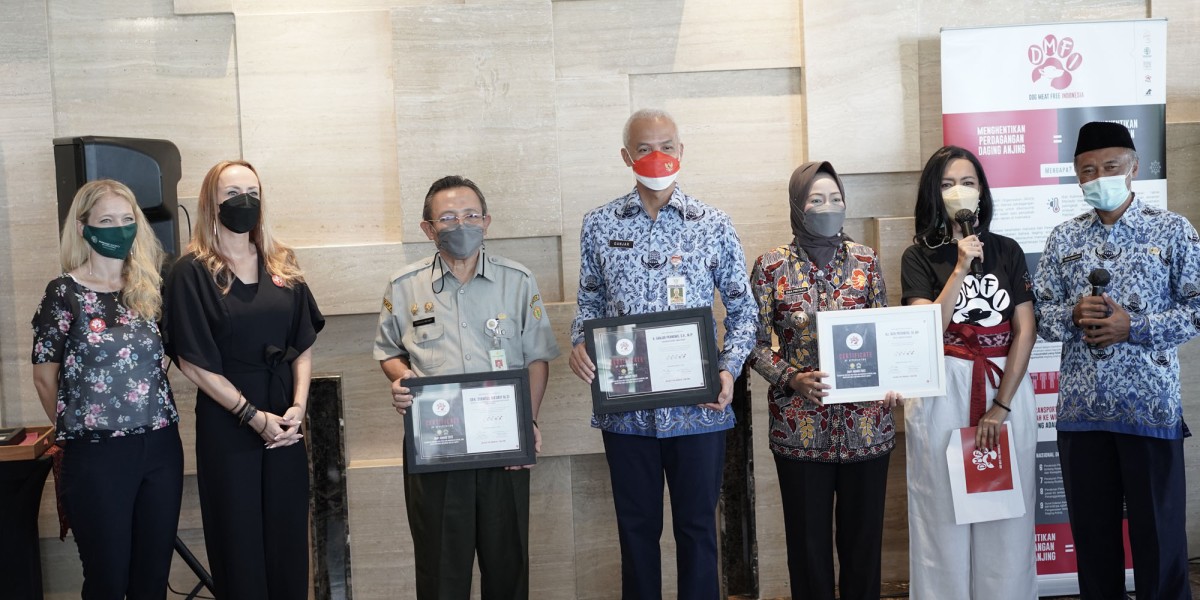 Added on Thursday, 17 March 2022
The Awards of Appreciation Ceremony, presented by Ibu Nina Tamam and co-hosted by the Ministry of Agriculture, Animal Health & Husbandry Department of the Central Java Province, and Dog Meat Free Indonesia (DMFI) coalition, is a celebration of the immense progress that has been made in many cities and regencies throughout the province of Central Java in taking progressive and strong measures to tackle the dog meat trade throughout their jurisdictions.

The event today marks a celebration for what has been achieved in Central Javan cities and regencies and a call on others to follow these examples, and the DMFI is proud to be working in collaboration with the Central Java provincial government and central government to showcase what can be done when authorities and NGOs work together for a holistic approach to tackle illegal, dangerous and cruel trades.

In recent years, we have seen groundbreaking progress in Karanganyar (June 2019), Sukoharjo (April 2021), Salatiga (May 2021) and Semarang (January 2022) that has seen regency and city-wide bans on dog meat trading operations has come as a result of the leaders’ concerns for public health and safety, as well as concerns for animal welfare; and just this month, Semarang Regency, Blora Regency, Purbalingga regency and Brebes regency joined the list, becoming dog meat-free! 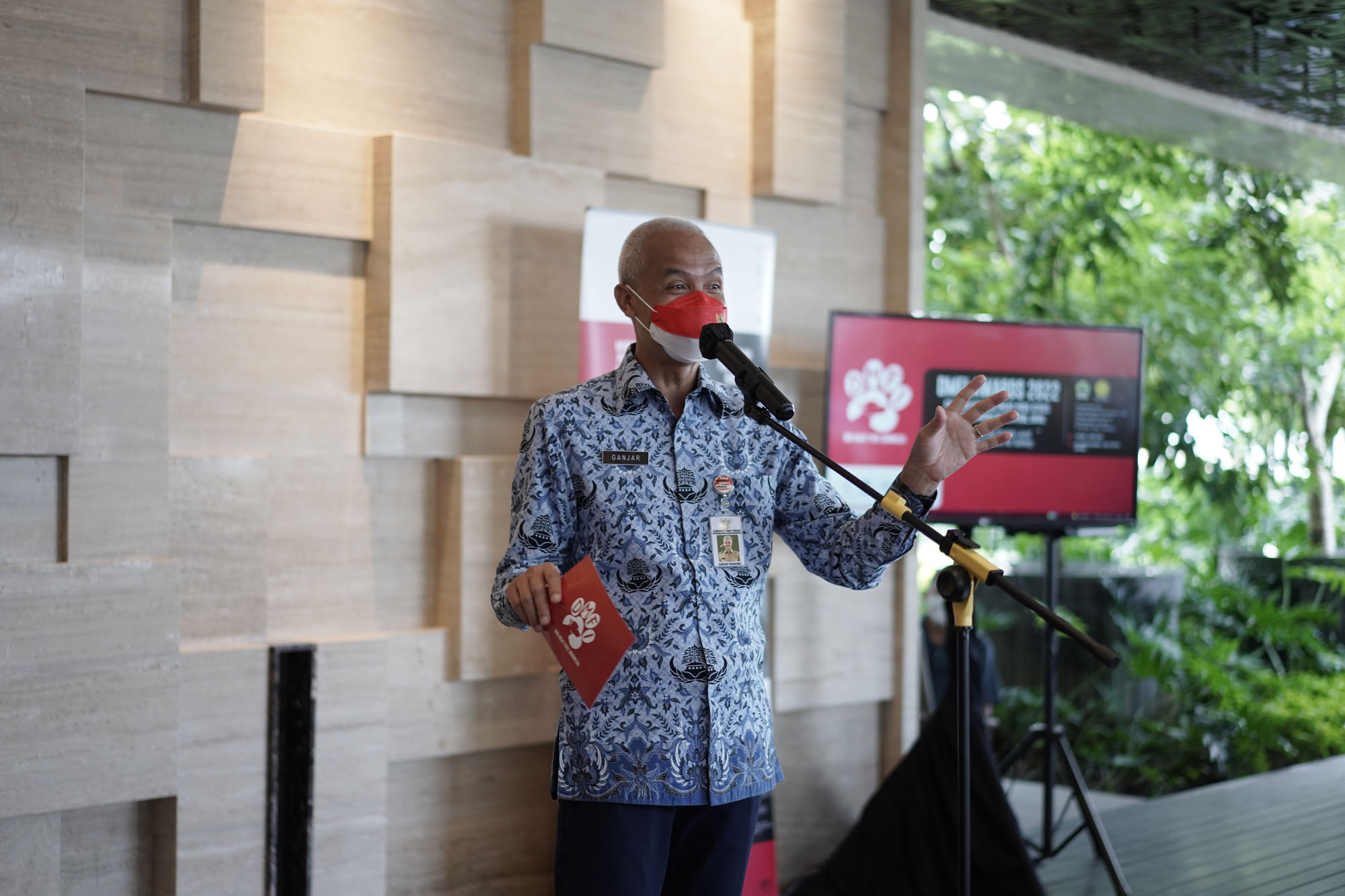 The DMFI has worked closely with the authorities to highlight the dangers the trade poses to the transmission of the deadly rabies virus into rabies-free Central Java that is one of just 8 out of the 34 provinces that have successfully eradicated the virus that causes immense suffering and fatalities in many parts of the country. Evidence spanning decades from throughout the region, including Indonesia (as cited by the World Health Organization (WHO)), has linked the illegal trafficking in dogs and slaughtering for human consumption to exacerbating and facilitating the transmission of deadly rabies. 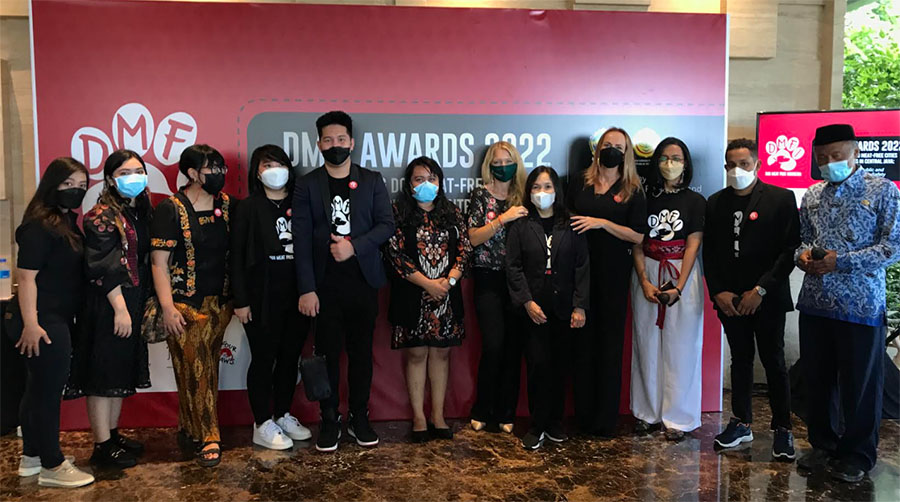 Karin Franken, National Coordinator of DMFI & Founder of JAAN Animal Welfare Foundation, said: "We highly appreciate Central Java’s  governor and Central Java as a whole. Central Java is the 1st province that’s taking progressive steps to protect the health and safety of its citizens not only by implementing regulations that ban the dog meat trade, but also by using an holistic approach in collaboration with DMFI. Central java is amazing and we appreciate all the efforts and commitments."

Mr. Drh. Syamsul Ma'arif, M.Si, Director of Veterinary Public Health, Ministry of Agriculture, Republic of Indonesia, said: “We all know that dog meat is not considered as food, according to Law No. 18 of 2012. Because there is a risk of disease that can be spread amongst humans, dog meat clearly should not be consumed and it is absolutely impossible for the Ministry of Agriculture to process food safety guarantee requirements. Animal welfare is also the responsibility of the regional government and the central government according to Law No. 18 of 2009. Therefore, we urge all regions to commit in making a ban on dog meat according to our Directive which issued in 2018 especially given that animal welfare has become a global issuel. Also, the illegal dog meat trade can pose a risk to public health and safety. So we urge local governments to support “dog meat Is not food” campaign and to stop this trade once and for all”.

Mr. H. Ganjar Pranowo, SH, M. IP, Governor of Central Java Province: "I want us to do this campaign in a better way.  With education programs that show that these animals (dogs) should not be consumed. There are social functions that show dogs are human companions and considered as pets. There is also a risk from diseases that can be  transmitted to humans, so this campaign must be carried out every day, by all parties.” Mr. H. Ganjar Pranowo,SH,M.IP went on to urge colleagues and other policy makers to promote that dogs are companion animals and pets. Don't Consume dog meat!.

Lola Webber, International DMFI Coordinator & Humane Society International’s Director for campiagns to end the dog meat trade, said,  "Never has it been more evident that Central Java, and Indonesia, is ready to join the likes of Hong Kong, the Philippines, Singapore, Taiwan and other countries and territories in Asia and around the world, who have banned this practice on grounds of public health, disease elimination and animal cruelty. We, the Dog Meat Free Indonesia coalition and the millions of supporters we represent globally, applaud you, Central Java, and stand by ready to support and assist."

Central Java is now paving the way for others to follow and is acting in accordance with national and global sentiment: dogs are companion animals that serve societies well and must be protected from abuse and exploitation, and the central government’s position is clear: Dogs are not food in Indonesia.

This event also serves to congratulate and award the groundbreaking actions of the Sukoharjo police, who, on the 24th November 2021, intercepted an illegal dog trafficking operation and illegal dog slaughterhouse, rescuing over 50 dogs. This first-of-its kind raid received global celebration and praise. All dogs rescued are receiving ongoing care at a purpose-built shelter by the DMFI, and the court cases are pending in Sukoharjo for the perpetrators.

This case will mark the nation’s second prosecution after Kulon Progo police intercepted 78 dogs being illegally trafficked in May 2021. The perpetrators were sentenced to 10 months in prison with a fine of 150 million IDR/$10,000 USD. This was the first-time dog meat traders have ever been prosecuted and sentenced in Indonesian history, sending a strong message to traders and regional authorities that laws exist that make this trade illegal. They were found guilty of violating Article 89 paragraph 2 in conjunction with Article 46 paragraph 5 of Law N0. 41 of 2014, concerning Animal Husbandry and Health because the truck illegally crossed provincial borders, with no record of the animals’ disease or vaccination status.

The DMFI coalition hopes that the huge progress we are seeing will result in wider actions and strengthening of national laws that are already in place to prohibit the trade in Central Java and surrounding provinces.