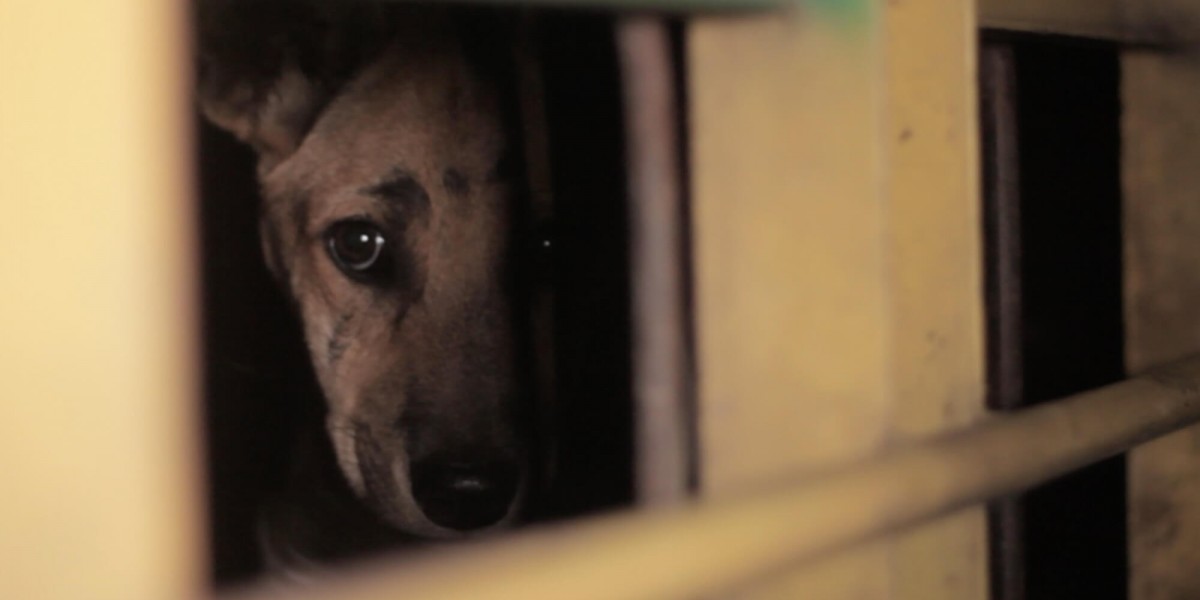 Horrific footage reveals large-scale trade in dogs for human consumption in Indonesia, defying the government’s pledge to end the trade

Added on Thursday, 25 April 2019
Indonesian and international celebrities, including Ricky Gervais, Peter Egan and Sophia Latjuba, once again join calls on the Indonesian government to keep its promise to ban the cruel and dangerous dog and cat meat trades following the release of Dog Meat-Free Indonesia’s latest investigation documenting the large-scale trade and abuse of thousands of dogs throughout the central island of Java each month.

JAKARTA, Indonesia — April 25, 2019 – Shocking new video evidence from filthy slaughterhouses in the Central Javan capital city of Surakarta -- more popularly known as “Solo” -- shows dogs being beaten and strung upside down to bleed out whilst still conscious, and in full view of other terrified dogs bound and caged who await their turn. The horrific footage recorded by the Dog Meat-Free Indonesia (DMFI) coalition, has prompted renewed calls for urgent action by the campaigners and their celebrity ambassadors.

The renewed calls for action come after the release of DMFI’s damning evidence showing that the brutal slaughter of thousands of dogs each month is continuing to take place in Solo despite the Central Government’s Ministry of Agriculture having issued a Directive in September calling on provincial governments to take action to tackle the dog and cat meat trades, that was globally-applauded. Speaking at the National Coordination of Animal Welfare meeting in Jakarta in August 2018, Director of veterinary public health Mr. Syamsul Ma'arif DVM, M.Si had described the treatment of the dogs and cats as “torture for animals”.

DMFI’s latest investigations and report reveal that an estimated 13,700 dogs of unknown disease and vaccination status continue to be captured and stolen each month from the streets of cities throughout Java – Indonesia’s most populous island and home to over 50% of the nation’s nearly 270 million people – with West Java acting as a “supply hub”, importing dogs into Solo’s densely-populated city centre. Here the dogs are brutally slaughtered and sold in one of the city’s 82 restaurants openly advertising the meat.

Lola Webber, Change For Animals Foundation, said: “Dogs are captured from the streets and stolen from people’s homes to be taken on long journeys – often lasting for days – tightly packed in pick-up trucks or in hessian sacks, their mouths bound shut so they can hardly breathe. They are then taken to filthy slaughterhouses where they watch others being slaughtered as they wait their turn, trembling in fear. The look in their eyes is haunting, the blood-spattered walls unforgettable.”

DMFI’s latest investigations suggest that Solo is an epicenter for much of the trade that operates on this central island, on a par with North Sulawesi, one of the focus provinces of DMFI investigations that resulted last year in a petition signed by over one million people worldwide and a letter to the President signed by over 90 global celebrities, including Simon Cowell, Sophia Latjuba, Yeslin Wang, Cameron Diaz, Chelsea Islan, Ellen DeGeneres and Pierce Brosnan, calling for urgent action.

Peter Egan, British Actor, animal rights activist and DMFI Ambassador, who visited Indonesia’s dog and cat meat markets last month, still struggles to understand how the trades can continue unpunished. “The dogs and cats caught up in these egregious trades are my first thought in the morning and my last thought at night. Dogs serve mankind loyally and deserve to be treated with compassion and respect.”

The treatment of animals filmed by DMFI is not only extremely brutal, but also flouts public health and safety regulations designed to protect citizens from deadly rabies transmission and the spread of other zoonotic diseases.  DMFI’s investigations have shown that the trade routinely relies on illegal, profit-driven and dangerous activities, including the trans-provincial long-distance trade in dogs, yet these acts seemingly go unpunished by authorities.

Campaigners warn that whilst dog meat is consumed by some for its perceived health properties, the reality is that the trade in and slaughtering of dogs poses a significant and grave risk of rabies transmission, and not only to consumers. In fact, it is estimated that just 7% of the entire population of Indonesia consumes dog meat, yet data spanning decades suggests it is no coincidence that the provinces and regencies with the greatest demand for dog meat are also those with the highest prevalence of rabies, with devastating societal, economic and animal welfare impacts.

Dr. M. Nurul Irfan, Lecturer at Syariah university, Member of central Fatwa commission and of Lembaga Dakwah Ulama, stated in response to the DMFI‘s Solo investigations that included interviews with a number of Muslim dog meat traders, “Eating and also the selling of dogs is haram and strictly forbidden. Muslims who think otherwise should be corrected immediately because we don’t want others to also start thinking it’s okay.”

In a country where rabies remains endemic in all but 8 of its 34 provinces after West Nusa Tenggara lost its rabies-free status earlier this year, and with 12 human fatalities already reported within just the first two months of 2019, campaigners warn it is only a matter of time before more people die of this disease that the government’s Ministry of Health had pledged to eliminate by 2020.

Jill Robinson MBE, Animals Asia Founder said: “It is time to finally wake up to the true cost of the dog meat trade. It is a public health emergency directly responsible for thousands of deaths every year due to the spread of rabies. No meal is worth so many innocent lives.”

“We know that rabies control and elimination efforts are futile without addressing the dog meat trade which is the only trade known to encourage the mass unregulated movement of dogs of unknown disease and vaccination status, facilitating the spread of the disease and disrupting any attempts to reach the required canine vaccination coverage required to ultimately eliminate the disease from the dog population”, warns Dr. Katherine Polak, FOUR PAWS.

“Pledges for action have been made from the Central government’s Ministry of Agriculture. DMFI and the millions of supporters we represent worldwide applaud this position.  But these words need to result in commitments for change through strong and impactful actions. For now, the illegal trades continue, threatening the health and safety of millions of Indonesians, and resulting in the suffering of thousands of animals each day. DMFI stands ready to help provide practical and on-the-ground support to secure the dual aims of eliminating both the dog and cat meat trades and rabies” – Karin Franken, Jakarta Animal Aid Network.

The latest exposé has also renewed celebrity outrage and commitment to support calls for action.

“It is devastatingly sad to think of the thousands of dogs and cats who are losing their lives in the most terrifying ways every day. As a nation who values compassion, humanity and respect for all, we must extend these principles to animals, who are often the most vulnerable members of our society.  If we truly value peace and kindness for all, we must align our actions with our words and call for a Dog Meat Free Indonesia!” – Sophia Latjuba, actress and DMFI Ambassador

As an ever-growing number of countries and territories in the region and around the world take action to tackle the illegal dog and cat meat trades, global public and political communities are becoming increasingly intolerant to the trades. With the recent Indonesian presidential elections having just taken place on April 17, campaigners hope now is the time for the government to prioritise this issue on grounds of public health and safety as well as animal welfare, and fulfill its pledge to take action to tackle the trade.

“The dog and cat meat trades are cruel and dangerous, and the time is now for action to be taken to banish these horrors to the history books of shame and illegality! The world is watching and waiting for action, today!” – Ricky Gervais, British comedian, actor, writer and DMFI Ambassador.