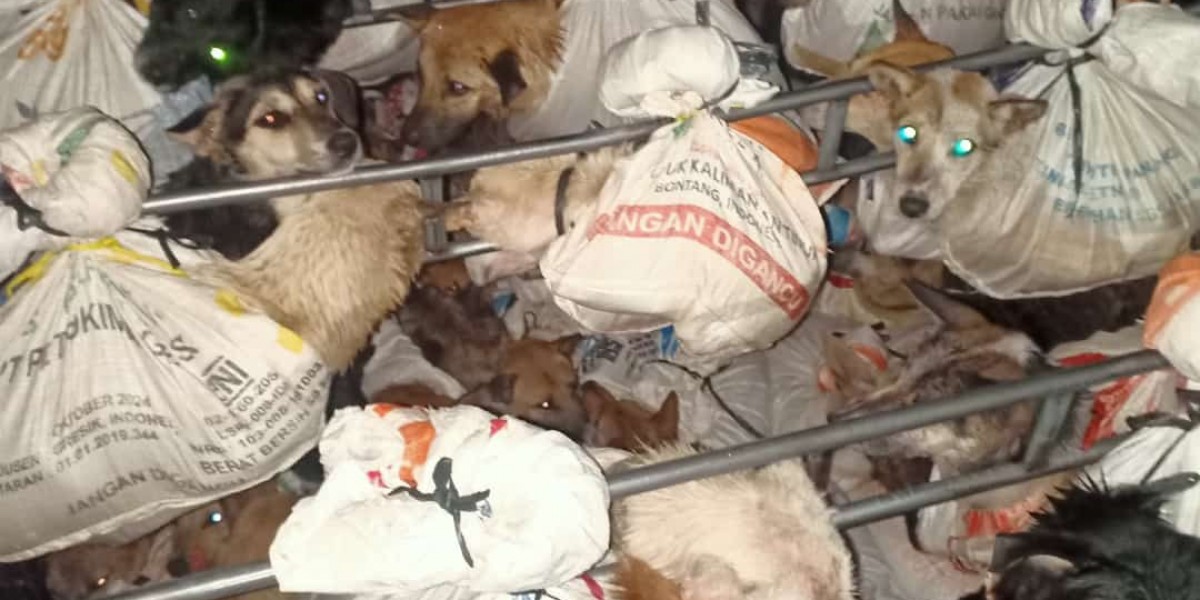 Added on Thursday, 13 May 2021
On the 6th May, the Police in Kulon Progo Regency intercepted a dog meat trader illegally transporting 78 dogs destined to be distributed for slaughter throughout Central Java. Despite the scale and illegality of the trade, this is the first interception of traders in Indonesia. The dogs had all been stolen from the streets, many still wearing collars, and transported from West Java, on a gruelling journey lasting over 10 hours and illegally crossing provinces, with no record of the animals’ disease or vaccination status.

The Dog Meat Free Indonesia (DMFI) coalition – on behalf of it’s millions of supporters around the world – applauds the police for taking action. At the time of interception, 10 dogs had already succumbed to heatstroke and disease, and a following 5 subsequently passed away following the immense trauma. The remaining 63 surviving dogs are currently being provided with care by Ron Ron Dog Care Jogja.

The DMFI coalition’s investigations spanning years have exposed the illegality and brutal reality of the trade in dogs from West Java to supply demand hotspots in Central Java and Yogyakarta: Every month, tens of thousands of dogs of unknown disease and status are collected and stolen from the streets and illegally transported on long journeys into urban centres. Many die during this horrific journey from heatstroke, dehydration or injuries inflicted during capture and transport. For those who survive, they are taken to filthy makeshift slaughterhouses where they are beaten and strung upside down to bleed out whilst still conscious, and in full view of other terrified dogs bound and caged who await their turn.

This interception highlights the need for strong and collaborative action to be taken between Provinces to end both the supply and demand of dogs, and to ensure enforcement and strengthening of existing laws. Already, Governor Ganjar Pranowo has explicitly stated that more needs to be done to tackle this dangerous and cruel trade, and two regencies in Central Java – Karanganyar and Sukoharjo – and Salatiga City have already passed explicit laws prohibiting the trade in their jurisdictions to safeguard animal welfare and public health and safety.

Yogyakarta’s and Central Java’s rabies-free statuses are under threat from the dog meat trade which is already illegal and operates in contravention to national policy which clearly states that “dogs are not food”.  Yet tens of thousands of dogs are being illegally transported from West Java each month, where rabies remains endemic, with no law enforcement or action, jeopardizing the health of tens of millions of Indonesians, with investigations having revealed a high prevalence of rabies-positive dogs being sold and slaughtered for consumption in some parts of the country.

Furthermore, by allowing dogs to be stolen and sourced from West Java, Governor Ridwan Kamil is jeopardizing any attempts to eliminate rabies from the province. Mass canine vaccination is the only effective way of eliminating the virus and this requires stable populations and limited movements of dogs.

Whilst we applaud the authorities in Central Java who have already taken action, we call on those who have not yet done so – including Solo city where DMFI investigations revealed that over 13,700 dogs are being slaughtered and consumed each month – to take urgent and immediate action. The DMFI coalition calls for a collaborative approach between West Java and other Provinces on the island to end both the supply and demand and to ensure effective deterrence and law enforcement. This is essential to safeguard human and animal health and welfare, the economy and national and international reputations, especially in light of the COVID-19 pandemic. Never before have the global calls to end dangerous and illegal animal trades been so urgent; and with a growing intolerance to animal cruelty, now is the time for action, in accordance with the laws and in line with international and national opinion: