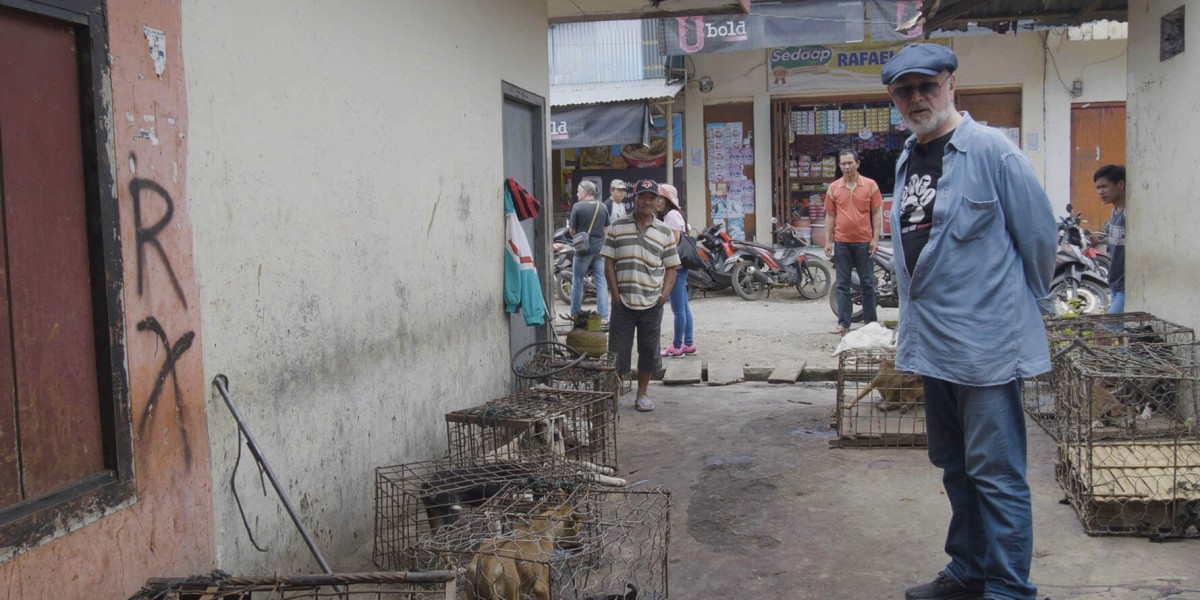 Added on Monday, 04 March 2019
British actor and animal activist Peter Egan has made an emotional plea to the Indonesian government to shut down the country’s cruel and dangerous dog and cat meat trades, following his visit to infamous live animal markets in North Sulawesi with campaigners from the Dog Meat-Free Indonesia coalition.

British actor and animal activist Peter Egan has made an emotional plea to the Indonesian government to shut down the country’s cruel and dangerous dog and cat meat trades, following his visit to infamous live animal markets in North Sulawesi with campaigners from the Dog Meat-Free Indonesia coalition. Mr Egan visited two of the most notorious of Indonesia’s 200 ‘live’ animal markets, including Tomohon’s “Extreme Market” and Langowan Market in Minahasa Regency, where he witnessed dogs and cats being sold and butchered in front of their terrified and blood-splattered cage-mates. The actor and DMFI campaigners managed to save four dogs from the traders just before they were set to be bludgeoned and blowtorched.

The actor was accompanied by British filmmaker Andrew Telling and DMFI campaigners, and footage of his trip show him clearly distressed watching traders menacingly wield knives used to butcher the animals. Children and passers-by walk through the blood-stained backstreets of the market, scenes that DMFI say are a daily occurrence.

DMFI is a coalition of national and international animal protection organisations comprising Change For Animals Foundation, Humane Society International, Animals Asia, FOUR PAWS, Animal Friends Jogja and Jakarta Animal Aid Network which documents the brutality of the trades and campaigns for ban on grounds of animal cruelty and risks to public health.

More than one million dogs and cats a year are killed for Indonesia’s meat trades, mostly strays grabbed from the streets or pets either stolen from back yards or purchased from their owners. Despite the scale of the trades, only a small percentage of Indonesia’s population – around 7 percent – eat dog or cat meat, and last year the DMFI campaigners secured a pledge by the government to ban the brutal trades. Since the pledge, however, government action has been lacking, and on the island of Sulawesi alone tens of thousands of dogs and cats every week continue to be captured, sold and slaughtered. 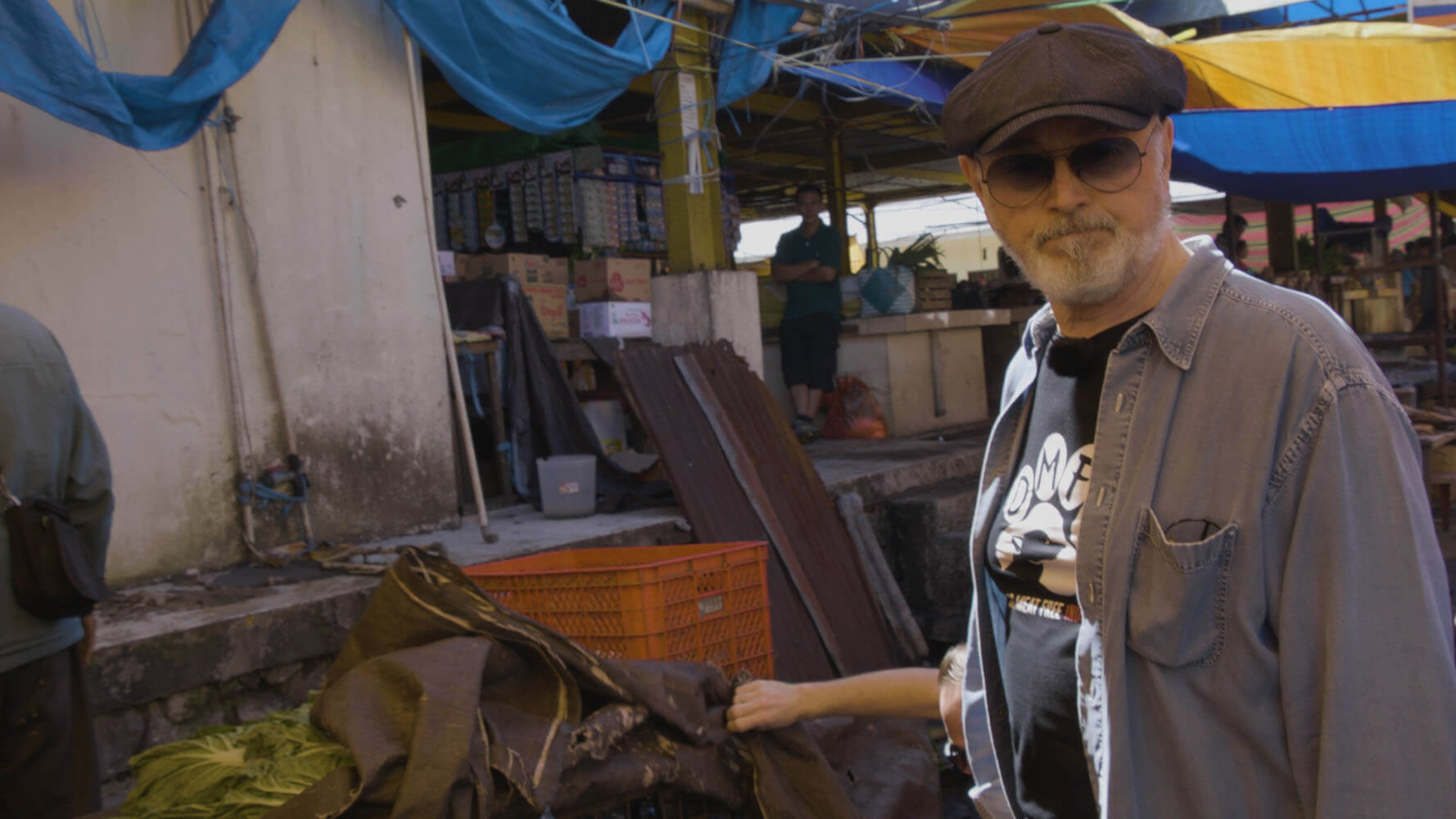 Peter Egan, an ambassador for the Dog Meat-Free Indonesia coalition since its launch in 2017, said of his trip: “I had been warned about the conditions for the animals at the markets in North Sulawesi, but nothing could have prepared me for the sickening horrors I witnessed. This part of Indonesia is world-renowned for its breathtaking volcanic mountain landscape, stunning dive waters and beautiful beaches, but the ugly brutality of the dog and cat meat trades will haunt me for the rest of my life.

The absolute indifference to animal suffering was so utterly shocking and heartbreaking. I saw countless dogs and cats waiting to be slaughtered, to lose their lives in the most brutal and cruel way.  There was nothing I could do to take away their pain, but their pleading eyes and the stomach-churning smell of blood and burning dog hair, are scenes of hell that I shall never forget. I am committed to exposing these horrors and to working with the Indonesian and global community to fulfil our united goal of ending the abhorrent cruelty of the dog and cat meat trades.” 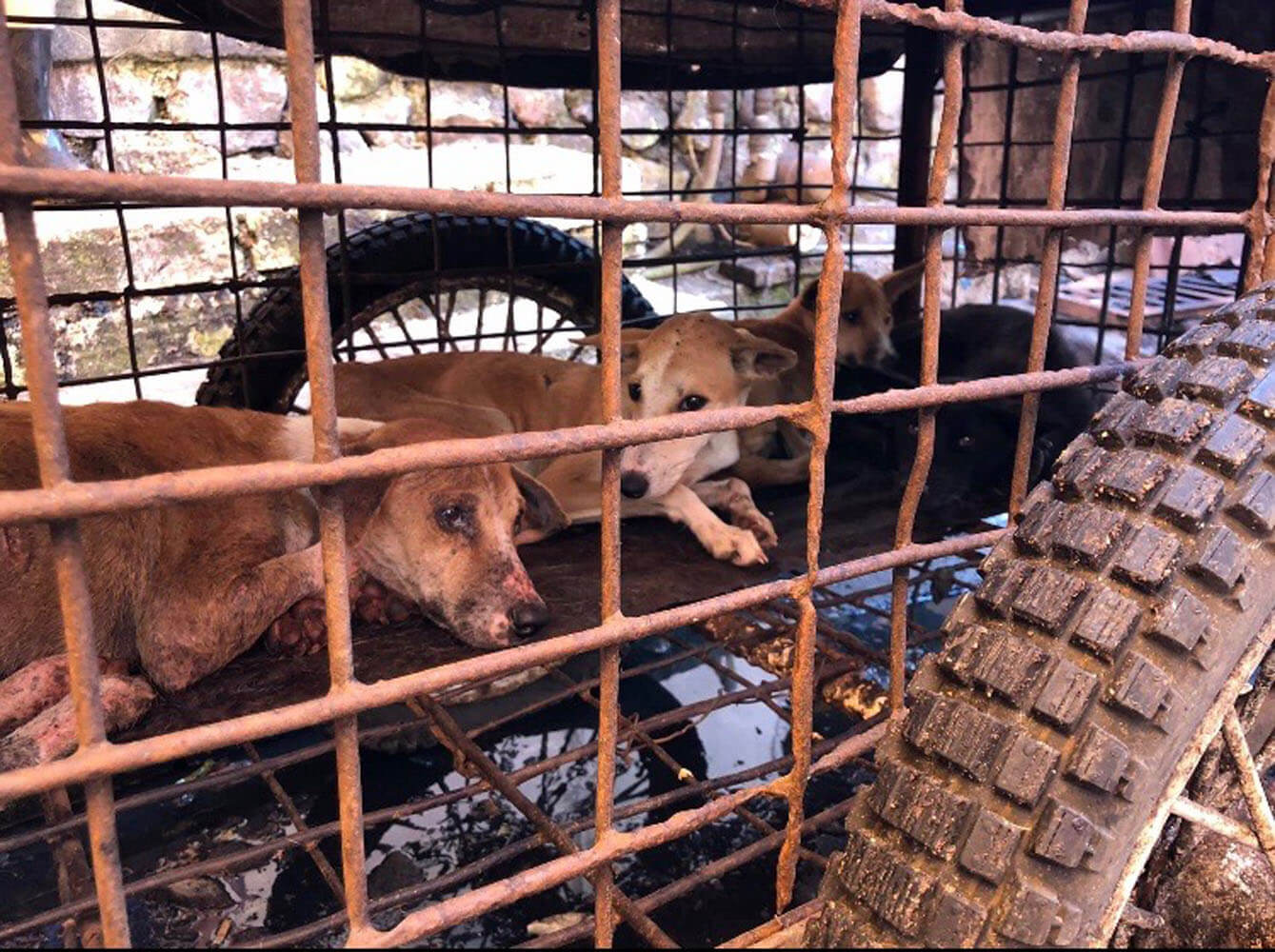 The Dog Meat-Free Indonesia campaign has received support from global and Indonesian superstars including Simon Cowell, Sophia Latjuba, Yeslin Wang, Nadia Mulya, Lawrence Enzela, Cameron Diaz, Chelsea Islan, Ellen DeGeneres and Pierce Brosnan who signed a letter to President Joko Widodo calling for action to end the country’s dog and cat meat trades. A petition of more than 1 million signatures was also submitted to the government of Indonesia. As well as exposing the immense animal suffering, the DMFI also highlights the risk the trades pose to human health from transmission of the deadly rabies virus that continues to plague much of the country. 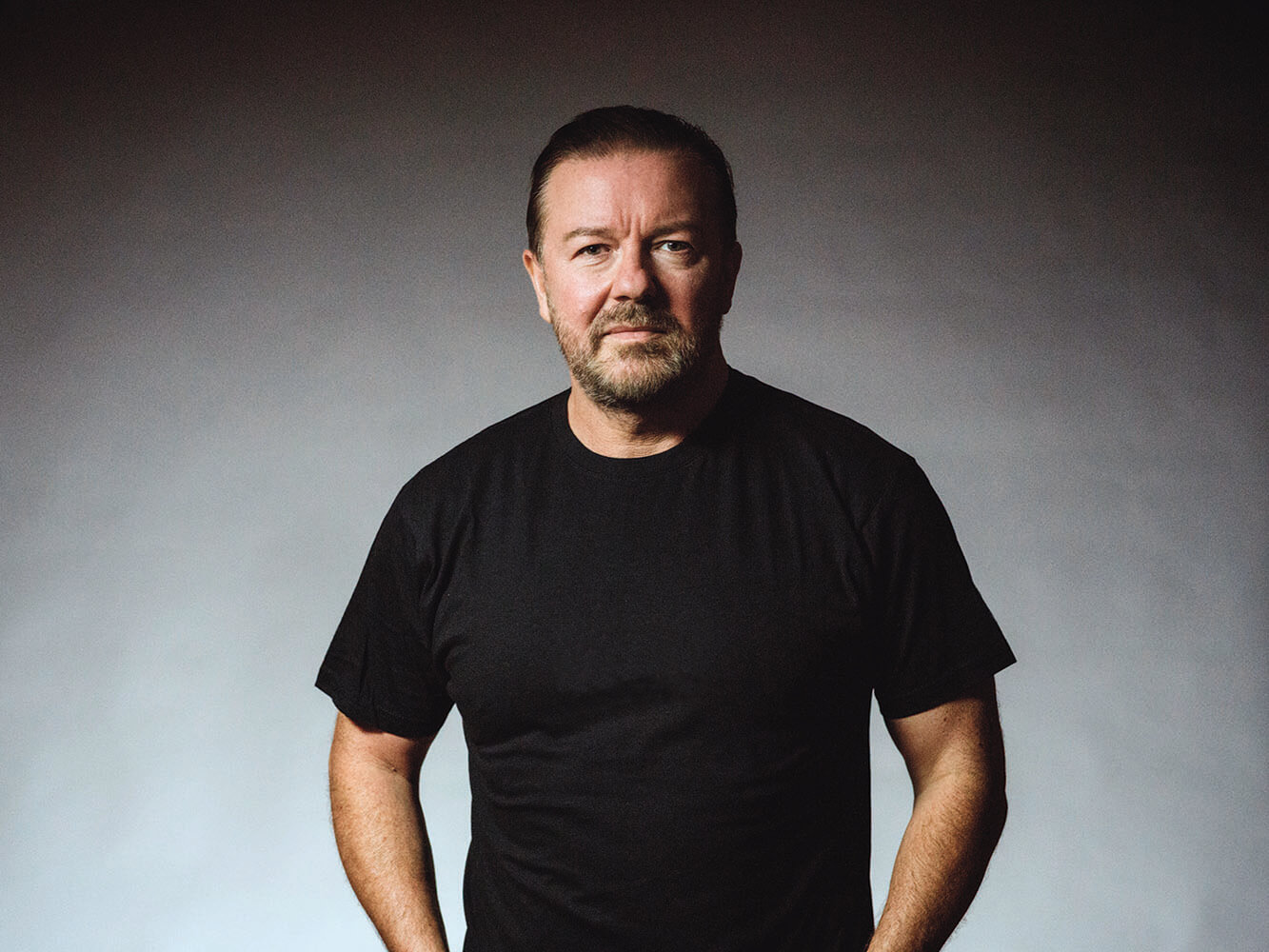 Ricky Gervais, British comedian, actor, writer and DMFI Ambassador, said after seeing Peter Egan’s footage, “The extreme cruelty of the dog and cat meat trades is unacceptable under both Indonesia’s and international animal welfare standards, and the government is right to be concerned about the impacts of these trades on its global reputation. The world is watching and waiting for action, today!”

The DMFI coalition says that despite pledges of action by local authorities in Tomohon, and condemnation of the cruelty from the Central government, little action has been taken.

Lola Webber, Change For Animals Foundation co-founder and DMFI representative who accompanied Peter Egan and Andrew Telling to the markets, said: “Thousands of dogs and cats are killed at the markets in North Sulawesi each week, and it is estimated that 90 percent are stolen pets, owned or street dogs. Some 80 percent are imported from other provinces, which is illegal under the country’s anti-rabies law prohibiting the movement of dogs across provincial borders in rabies endemic areas. Having visited the dog and cat meat markets in North Sulawesi countless times, the horrors never cease to bring me to despair. Despite DMFI’s exposés of the cruelty, warnings of the dangers to public health and risk of rabies transmission, nationwide and global condemnation, and promises of action by local and central governments, business continues as usual.” 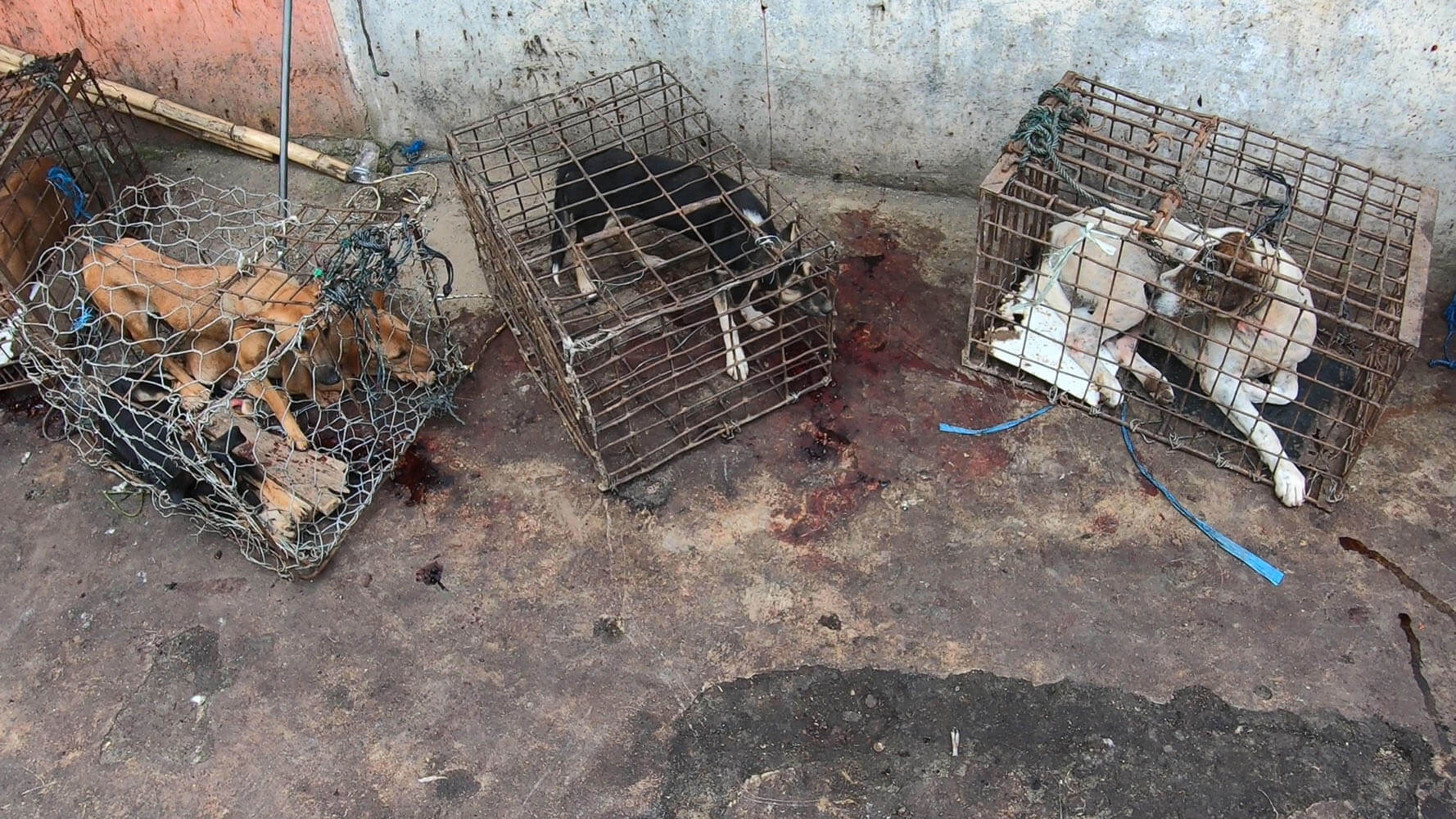 While relatively few people in Indonesia consume dog or cat meat – perceived to hold health properties or be defended as “culture” by a minority – the health of the entire nation is put at risk by traders blatantly breaching rabies control efforts. Deadly rabies has infected an estimated 628 people since January this year, killing at least 12, according to the Health Ministry. It is no coincidence that areas with the greatest demand for dog meat are also those with the highest prevalence of rabies. North Sulawesi Province has some of the highest numbers of human deaths from rabies in Indonesia, including three already this year.

Indonesia is heavily reliant on the tourism industry, with more than 10 million tourists a year visiting the archipelago, renowned for its natural beauty. But growing concerns for tourists’ safety, and mounting calls for travelers to boycott a country seemingly unwilling to act to end the dog and cat meat trades, is putting tourism at increasing risk. Already the Australian government has issued an official warning on its travel advisories webpage for Indonesia stating, “Rabies poses a risk to those who visit local markets where live animals and fresh food are sold, as rabies-positive dog meat may be sold for human consumption, in breach of government disease control regulations, and live rabies-positive dogs may be present.”

The threat to tourism posed by dog and cat meat cruelty was acknowledged in August last year by Mr. Syamsul Ma'arif DVM, M.Si, director of veterinary public health, when he attended the National Coordination of Animal Welfare meeting and warned that “foreign countries find a low standard of animal welfare and cruelty unacceptable and will stop visiting Indonesia which is very bad for our tourism.”

Sophia Latjuba, actress and DMFI Ambassador, said: “As a nation who values compassion, humanity and respect for all, we must extend these principles to animals, who are often the most vulnerable members of our society.  If we truly value peace and kindness for all, we must align our actions with our words and ban the cruel and dangerous dog and cat meat trades!”

Karin Franken, Jakarta Animal Aid Network, DMFI member, said: “These trades already operate in breach of existing laws and regulations, and the nationwide movement from within Indonesia is calling for an end to these horrors. It is now time for the Indonesian government to turn its promise of an end to these cruel and dangerous trades into meaningful and impactful actions, and we are ready to work collaboratively to make a dog and cat meat-free Indonesia a reality!”

The DMFI coalition has written to Indonesia’s local and central governments, calling for urgent action. Despite meetings with the North Sulawesi provincial government and the Mayor of Tomohon’s office with promises of action being made during this visit, to date, no clear and meaningful actions have been taken.

Kitty Block, President of Humane Society International, said: “Tourists would be appalled to learn that more than one million dogs and cats are slaughtered in Indonesia. The country’s slogan of “Wonderful Indonesia” is certainly untrue for those animals who suffer that fate. We urge the government to make good on its pledge and act to end this animal welfare crisis.”